I suggest 2nd through 5th grade. 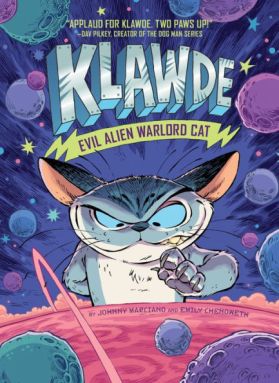 While my fourth-grade daughter inhales book after book focused on Warrior Cats, I decided, for our nighttime reading, that we needed a different variety of feline entertainment.

Klawde is irreverent, silly, and laugh-out-loud funny. But best of all, it has the same beautiful message of friendship distilled in its pages that is found in my most favorite children’s novels. However, this message comes with a certain amount of sass that only a cat with unexpected ethics can deliver.

I highly recommend this as a “read-to” or “read-with” type of book. Both my nine- and seven-year-old enjoyed it equally. Also, some advanced vocabulary was a great learning addition!

Here’s more from the publisher:

Klawde is not your average cat. He’s an emperor from another planet, exiled to Earth. He’s cruel. He’s cunning. He’s brilliant… and he’s about to become Raj Banerjee’s best friend. Whether he likes it or not.

Klawde had everything. Sharp claws. Fine fur. And, being the High Commander of the planet Lyttyrboks, an entire world of warlike cats at his command. But when he is stripped of his feline throne, he is sentenced to the worst possible punishment: exile to a small planet in a quiet corner of the universe… named Earth.

Raj had everything. A cool apartment in Brooklyn. Three friends who lived in his building. And pizza and comics within walking distance. But when his mom gets a job in Elba, Oregon, and he is forced to move, all of that changes. It’s now the beginning of summer, he has no friends, and because of his mother’s urgings, he has joined a nature camp.

Heavily illustrated, with a hilarious, biting voice that switches between Raj and Klawde’s perspectives, this is the story of an unlikely friendship that emerges as two fish out of water begin to find their footing in strange new worlds.